So it’s been a crazy week, and there’s just been so many things going on that it’s hard to get my head straight. But one of the nice things about having a busy week is that you get to meet a lot of people and catch up with others.

One of the more important things that happened earlier this week was Francis’ birthday, and to celebrate his birthday, we spent last weekend at Binondo to eat our hearts out. It was the epitome of laziness: eat, sleep, eat, and then sleep again. It didn’t help that the rainy season started in earnest, so everything just made us want to stay indoors and watch TV. It was also a very relaxing weekend – at least for him. (I was working on a paper, so I spent the evenings writing.) 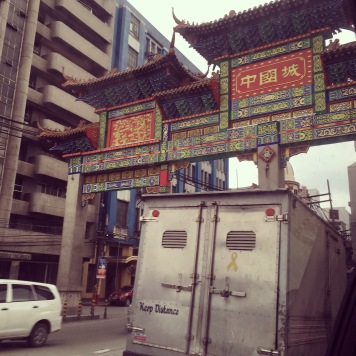 The Binondo Cathedral, seen as you enter the area.

Mezzanine Cafe is best known as the home of the lechon kawali. They also have fantastic asado. 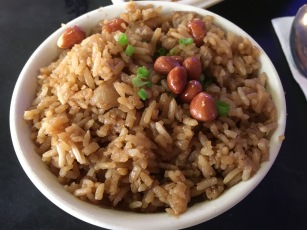 For dinner: fried chicken and chamlobihon. Not pictured: a steaming plate of lumpiang shanghai.

Sincerity Cafe’s chicken is leaps and bounds better than anything KFC comes up with.

Final lunch at Tasty Dumplings. Their beef noodles were a revelation.

From time to time, I get invite to talk about creative writing to high schools in Metro Manila. I really enjoy that time that I get out of the university, because it gives me a glimpse of how younger students see writing and the world. I think if I had met more authors when I was younger, I would have been more confident about my own writing, and perhaps be encouraged to pursue writing as a career sooner.

This week, myself and Sophia N. Lee, author of the award-winning novel What Things Mean (Scholastic Asia), were invited to speak to the HUMSS senior high school students of St. Paul College, Pasig. Their teacher, Shaniqua, was my student and thesis advisee during college, and I’m so glad that she’s practicing her writing in her own way, by inspiring other young writers to pursue the craft. The students were a lovely, boisterous, and energetic bunch, and I hope that we were able to encourage them to be writers and readers. 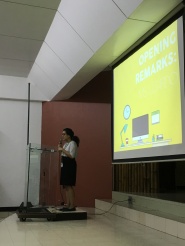 After our talk! Sophie was an awesome partner for this event.

The student is now the teacher. So proud.

Anyway, here’s the text of the thing I read at the event:

When I was in high school, I was very good at trapping myself inside my mind. I had a lot of insecurities, and I was scared of a lot of things. I didn’t really have a lot of confidence in myself. I didn’t like the way I looked, the way I dressed, the fact that I wasn’t pretty or smart or confident like my other classmates.

It didn’t help that I had a cousin who was in the Math & Science section, who was pretty and thin and smart and she sang in the school choir and eventually became part of our graduating batch’s Top 10 students. Unlike her, when I graduated, I received only one award: a Participation Medal, for being with my school since kindergarten until high school.

But while most of my classmates were not sure of where they were going, and they were scared of moving on from high school and into college, I was excited. Unlike them, I was certain of one thing. I knew exactly what I wanted to do: I wanted to write.

I’ve always believed in the power of the written word. Whenever I would fight with my parents, I would write long letters addressed to them, trying to figure out why I got so angry and explain my side of the story. Whenever there was something I didn’t understand in class, I would write notes to myself, trying to work out ideas and thoughts that I had about the subject or the topic we were discussing. I preferred escaping into a book. I didn’t like talking a lot, simply because I thought I had nothing to say.

It turned out that I just needed to find a new way of saying things.

I always knew that I wanted to be a writer. I also knew that it would be difficult: nobody really made money from writing, and people generally discouraged us from going into a career in the arts. In fact, my high school guidance counselor told me that I should just give up, because I wouldn’t be able to support myself. But my parents were very supportive of my decision from the beginning and, more importantly, they gave me the freedom to try, and fail, and try again.

Here’s the thing nobody told me when I first started out: there’s no single way to get what you want. I was lucky enough to get into the best writing program of the best university in the Philippines, and I had great teachers who allowed me to figure out what I wanted to say and the various ways of saying them. And while I was studying, I learned three things about being a writer, and being in the creative industry in general:

1. Take every opportunity presented to you – You don’t know when your chance will come again, especially when you’re young. If you have the opportunity to apply for a writing workshop, to attend a talk, to do a job, to learn something new, then take the opportunity.Being in the humanities is about being brave enough to take chances, and to explore things that you’ve never done before. The experience matters as much as the results.

2. Be truthful to yourself – For the longest time, I wrote because I had, to quote William Wordsworth, a “spontaneous overflow of powerful feelings.” There was no other way for me to deal with those feelings but to write them out. I learned how to accept mistakes that I made, and how to deal with myself when I was being irrational or angry or cranky or happy or excited or ecstatic. And in the process of writing them, I discovered and learned something more about myself. And in turn, this helped me become more at peace with who I am. So many of us are still discovering who we are, and writing is about uncovering that truth, and accepting it.

3. Be kind – When I talk about kindness, I’m talking about treating other people in the same way that you would want to be treated. Having been around writers for a very long time now, I’ve always learned that you never know who you’ll be around with, or who will know whom, and how other people see you. When I was still a student, and I desperately needed a break, people were kind enough to provide me with jobs and opportunities that I needed. And it’s always good to pass that kindness on. After all, this world could use a little more kindness – being kind to others, and being kind to ourselves.

Writing is a very solitary task. You’re stuck with the voices inside your head for a long time, and normally you’re just confronting yourself and the blank page. But there’s nothing wrong with being by yourself. In fact, I’ve found that one of the most peaceful and relaxing things to do, in the craziness of the world we live in, is to be quiet inside my head and just write. And I learned that in the moments when I put pen to paper, or type out words on a page – that is when I am most myself, and when I am free.