This is very important. You will have nothing to launch if you did not write anything in the first place.

To my past self’s surprise, I never really imagined writing a collection of short fiction; my writing trajectory in college was poetry, and so I wrote fiction as finger exercises, a way to relieve stress, a more personal way of figuring out the world. The earliest story in the collection (“Through the Looking Glass”) was written for a college writing class; the latest story (“Honesty Hour”) was written for an anthology that came out in 2013. Of course, I wrote stuff after then, but because they’re in various stages of publication, or too near the date when I submitted the manuscript, I took them out.

In other words, it took me roughly a decade to collect all of the stories for my first book.

When I first started writing in a genre that would eventually be called speculative fiction in the Philippines, nobody really paid attention to the genre. It was called escapist and shallow and foreign and a bunch of other adjectives that had negative implications. It took a lot of bell-clanging and fiery defending and intellectual arguing and whatever-you-have before books started coming out and people started reading and writing and studying the genre and before you know it, everyone wanted to write sf.

But personally, there was still this feeling of shame, like I wasn’t writing serious fiction, or illuminating fiction (navel-gazing, perhaps?) though of course now I know that sf stands on equal footing with all other genres, and that the label on a story shouldn’t necessarily preclude how it is written or enjoyed by a reader. Still, I was very hesitant to give the collection to just about anyone, so I chose a publisher who was doing work in genre-specific fields and who might be willing to take a chance on an sf collection.

Thankfully, Visprint was kind enough to accept my manuscript, and we took about a year to slowly work on the manuscript and the editing and the design. It helped that it was shepherded along by two very awesome people: Nida Ramirez and Kyra Ballesteros.

Everyone, and I mean everyone has been complimenting me on the book design cover, which shouldn’t be the case because all credit goes to the fantastic Elbert Or, with whom I’ve been friends with since we were in high school and who, thankfully, agreed to design my book cover and do spot illustrations as well. This, despite the fact that he and his lovely wife Lorra was about to welcome their first child, Liam Oliver, just around the time the manuscript was finally on track to becoming a book.

He interpreted the stories as blueprints (instructions, if you will) and anatomical designs and skeletons and all sorts of lovely visual motifs to go along with the title story and the themes of the other pieces, and for that, I will always be grateful that he handled my first book with such understanding and craftsmanship and insight.

People always say, don’t date writers. Or another form of dating advice: don’t date people you work with. WELL TOO LATE. I DID. AND IT WAS THE BEST DECISION OF MY LIFE.

Honestly though, if it wasn’t for Francis prodding me and poking me about finally, finally coming out with my first collection (“it’s about damn time,” he says) I probably would have shelved it forever.

One of the things that I knew I wanted to do was to go back to my writing roots, so to speak, in terms of just tracing where I came from and what I wanted to become in the future. I also knew that I wanted women sf writers to write the blurbs for the book – and I was very pleased to have gotten Cyan Abad-Jugo and Kristine Ong Muslim to write these blurbs. I was also humbled and grateful that the ever-busy Dean Alfar made the time to write the introduction to my collection. ❤

I cannot stress enough how important this is. You are only as good as your last work.

The front page! It smelled so good. 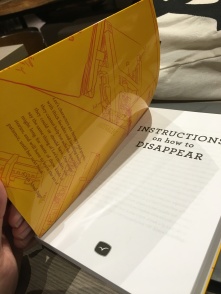 I think I almost shed a tear with this.

French flaps, with spot illustrations by Elbert Or.

Basically, an About Me page

I tried, I really did, but school got in the way.

Look, it’s a poster with my face on it! 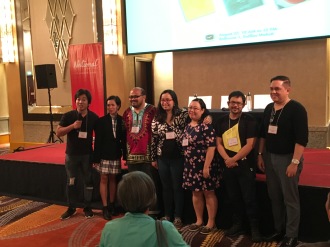 Yes, I really am this tiny.

All three books that were launched that day.

I think the only thing that made me sad was that Francis wasn’t able to attend the launch because he was terribly sick at the time. I was, however, pleasantly pleased that my brother Louie, the otherwise tall-but-silent type, gamely took the reins and spoke on my behalf, and I HAD A LOT OF FEELINGS okay? And then Francis shows up online and posts a lovely introduction for me that he had wanted to read at the launch, but for health reasons, couldn’t.

So that’s how you do it. And at the very end, you should reward yourself with some awesome Mexican food with your siblings, because what other way to end a day, right?