One of the things I never saw for myself was marriage. Sure, falling in love was easy – I could do it in a heartbeat. But staying in love, working through a relationship? That was something that I only read about in self-help articles and Thought Catalog think pieces. I knew how to spot the warning signs of a relationship that was about to fall apart – I had been on too many of those to not see patterns – but I was woefully unprepared for being with someone in the long run.

This isn’t to say that Francis isn’t a gem; he is. I think it was mostly me who didn’t know how to wear the idea of forever. I always expected the other shoe to drop: that there would come a day when he would find me clingy, or gross, or not ladylike enough, or too intelligent (which was an actual reason an ex-boyfriend used when he broke up with me, back in my early twenties: “You’re too intelligent and you speak straight English. I can’t handle that.”) or the hundred million reasons I’ve heard from the mouths of boys who left me.

But that never happened. And when we first broached the idea of marriage, it was very much a partnership. We took very calculated steps towards it: date for a year, see if it works. Co-habit for a year, see if it works. And when it was working – and working very well, and we were still very much in love with each other – then we finally thought about making it permanent. We even chose my engagement ring together, and the proposal happened very quietly and very quickly: just at home, just the two of us, and just right.

Which isn’t to say that everything just kind of fell into place. We knew we didn’t want a church wedding, and we had to check with both sets of parents to see if they were okay with that (they were, especially when we told them how much it would cost). We also knew that although we would have wanted a nice reception, where we could feed our family and friends, and dance weird dances and listen to embarrassing speeches (I think my siblings were very prepared for this moment), we knew that we couldn’t afford it as well. We even toyed with the idea of sending un-invitations to friends, so that they would know that we wanted to invite them, if we could afford an actual reception.

(Side note: Weddings are expensive, whether they’re DIY or couture affairs. One of the things we wanted to make sure of was that we didn’t incur any debt while getting married; it didn’t seem auspicious.)

One of the things that I will forever be grateful for is the support of our friends from the English department. So much support, in fact, that our witnesses were two faculty members and former professors, simply because we just thought that they should be part of our wedding day because of everything they’ve done for us. And one of the things that really, really made my heart swell was the fact that everyone was just incredibly supportive of all of our decisions, and were very kind to give us advice and gifts and even through us a shag party – a combined stag party and bridal shower – and pushed through with a hilarious Jollibee Kiddie Party set-up (sans mascot, sadly). I was just amazed with everyone’s kindness and love that day – for us! For teeny tiny little us! 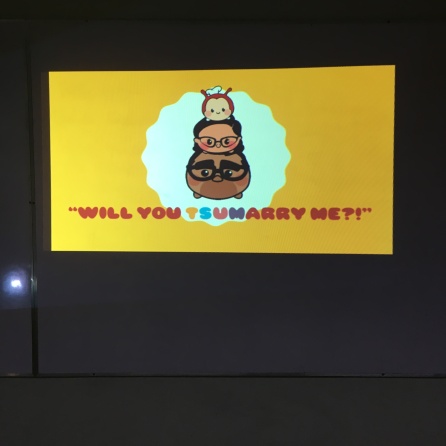 They made Tsum versions of us during the party at the English Department! (It probably confused some of the senior faculty. Sorry.)

It was basically a Jolly Kiddie Party with Backstreet Boys music. 😀

Similarly, my family and non-work friends also planned a kind of despedida de soltera, and this was a real surprise for me. I had no idea that it was going to happen – and I ended up bursting into tears. There were depths of gratitude that I had no idea I was capable of feeling. Everything was spontaneous and heartfelt and the significant lack of pretense was simply magnificent. (I still get teary-eyed thinking about it.)

Simply put, I am incredibly lucky and thankful to be surrounded by wonderful people all around.

Fam and friends at Borough!

College friends even got us a proper wedding cake and made us cut it. O.o

I also think that one of the things that all of these celebrations allowed us to do was to focus on our relationship. One of the things that I was concerned about was the fact that, as far as most people were concerned, this was a pretty austere and non-traditional wedding. I wasn’t even wearing a wedding dress! But everyone didn’t mind. People kept on telling us that we were doing the Right Thing.

So it was very helpful to have the space to ourselves and kind of just have an assessment of what we wanted for ourselves and for each other and for our relationship, to reaffirm that we wanted to get married for ourselves, because we love each other and we were willing to use that love as a foundation to become better people and have a strong relationship. And though we didn’t have any kind of couples counselling (which might have been helpful? IDEK), I think that we were able to iron out some of the things that would have been problematic in the long run. 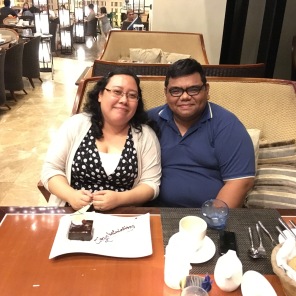 So now, two months into being a wife (typing that still makes me feel giddy), I think that we did the Right Thing for the Right Reasons. I ended up being married to my best friend and partner-in-life, and I think that, together, we can do greater things than if we were to do it alone. And for this alone, I’m thankful. Forever is a lot easier than I thought.